The Blockchain Will Allow Community Solar To Cut Out Utilities

The promise and great potential of community solar has been stifled by electric utilities.  Utilities like Xcel Energy in Minnesota have publicly supported community solar policy, only to do everything they can to delay and kill projects behind the scenes.  Case and point, the chart below from ILSR shows almost no operating CSGs operating two full years after the launch of the program.  To be clear, the majority of these projects are being held up by roadblocks and challenges from Xcel Energy.  Many of these projects could be built and operational in a matter of weeks. 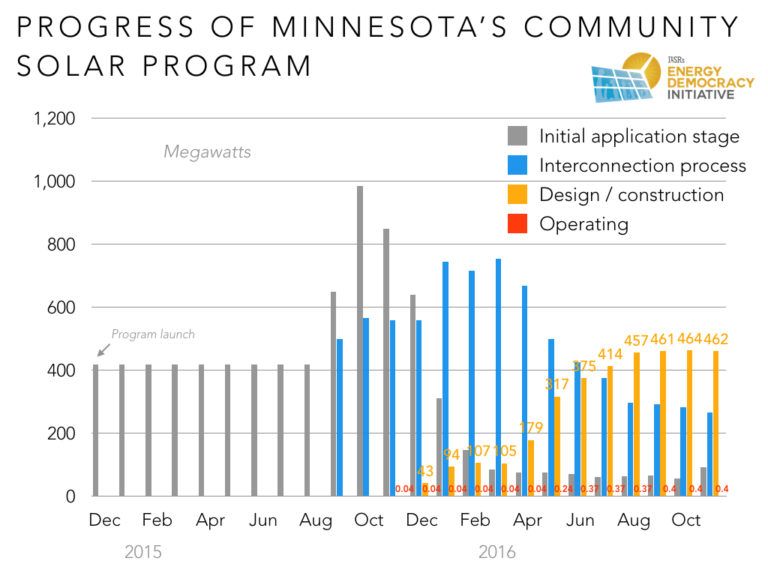 Luckily, there may be new ways of structuring community solar that do not involve electric utilities, thanks to something called The Blockchain.

Blockchain is the distributed database that underpins the crytocurrency Bitcoin, and it could change the way electricity is bought and sold around the world. Blockchain is a continuously growing record of all transactions, stored and updated on every devise on the network. Since each device monitors the others to detect fraud,  it would be nearly impossible to tamper with, even by its own operators and inventors. Investors have flocked to Bitcoin because it can’t be manipulated by governments, who have been known to print money and devalue their currency.

Blockchain has been adapted (in what are called sidechains) to enable real-time ride sharing, data storage, crowdfunding, and rights management for music companies. But the most audacious use of blockchain is now underway: an attempt to create real-time, decentralized energy markets that could spark massive investment in clean, renewable, and low-cost energy.

In Brooklyn, a microgrid operated by Transactive Grid is now counting the electrons generated from solar panels on one side of President Street, and storing the data on a decentralized blockchain. On the other side of President Street sits a row of homes interested in buying excess solar energy from their neighbors.  Until now, there has been no way to enable this transaction.

“We are in the process of rolling out our first demonstration network on President Street in Brooklyn and it will be a great proof of concept. We hope that street will be remembered in the future as the start of a step change in the energy industry,” said Transactive Grid co-founder Lawrence Orsini.

Transactive Grid is a joint venture between LO3 Energy and Consensys.  Underpinning the network is an open source, cryptographically secure decentralized application platform Ethereum.  The result is a grid that can “support energy when one person wants it, and one person has it,” according to a recent video. “The ability to actually transact on a peer to peer basis, individual consumers and producers in a microgrid is a big part of how a community microgrid can function.”

Unlike buying Renewable Energy Credits (REC’s), purchasing your neighbors excess solar power means you are likely to consume those same electrons generated on their roof. Laws of Physics guarantee that electrons will go to the nearest load, which Transactive Grid points out “will probably be the neighbors refrigerator.” Blockchain enables that transfer of electrons to be accounted and paid for between community members.

In a ‘New Scientist’ article, Transactive Grid Co-founder Lawrence Orsini explained how Blockchain enables a more efficient energy market.  “You don’t have the billing components around it, you don’t have the infrastructure losses or the accounting losses in the system,” he said.

The company is now designing an app that will let solar panel owners monitor and transact their excess production based on personal preferences such as maximized return and community benefits. Eventually, the app could control batteries, generators, and significant building loads.

The technology widens the potential for community benefits detailed in a recent ILSR report.  The most clear benefit is that money and jobs stay in the community. It also lessons the need for rate-based infrastructure investment, which benefits all ratepayers.

First of all, there’s not a good financial case for peer-to-peer electricity trading in states with net-metering (NEM) policies. Net metering allows solar customers to sell back excess electricity to the utility, and is credited against grid electricity used when the sun is down. But as we’ve seen in Hawaii, Florida, and Nevada, net-metering could be on its way out. As NEM is phased out, P2P energy markets could offer a way to maintain the value of rooftop solar.

But even in a post-NEM environment, blockchain faces an uphill battle under current market structure.  Electric utilities charge customers based on their electric meter, so any local market is impractical without direct utility involvement.  However, allowing communities to trade electrons undercuts their central business model, which is building expansive transmission infrastructure and selling electricity to ratepayers.

The Institute for Local Self Reliance recently released a report identifying the key barriers to microgrid adoption, which are largely the same barriers for local energy markets.

To broadly enable P2P Energy Markets, significant policy changes will be necessary, but creative ways can be found in the meantime.

Behind the meter energy trading

If market design doesn’t allow P2P energy transactions, certain communities and buildings may be able take matters into their own hands.  Blockchain can enable energy trading within a microgrid, where multiple buildings and entities have a single point of connection with the utility grid. Each building may have its own distributed energy resources (DER) that can be optimized with an open blockchain market.

For instance, if Building A has a solar array with energy storage, and Building B has CHP (concentrated heat and power) capacity, Building A could buy electricity from building B on a cloudy, winter day.  It is also more efficient as the electricity doesn’t travel far, and waste heat is utilized throughout the microgrid. Central power plants often operate around 33% efficient because they are too removed from population centers to utilize waste heat from combustion. Further energy is then lost by stepping up voltage, sending it long distances, and stepping the voltage down again.

Many apartment buildings, corporate, and college campuses also have a single point of connection with with their electric utilities. Any large area with multiple power-purchasing entities are ripe for internal energy trading using blockchain, and would incourage an ecosystem of efficient, clean energy.

As utilities become increasingly hostile toward net-metering, a blockchain-based energy market could allow anyone to sell excess solar and energy storage capacity to their neighbors. They may pay a service charge for their local distribution lines, but will not be responsible for maintaining the larger transmission grid as the trade is local. In fact, more local energy trading will increase local generation and reduce the need for transmission infrastructure, saving money for all ratepayers.

Bottom-up Disruption Is Now The Norm

It may be most impressive that the monopoly utility business model has not yet faced transformational disruption from an enabling technology, which has shaken up nearly every industry.

Given the right tools, even the most established, powerful industries have been flipped from the bottom up.  Skype Cofounder Niklas Zennstrom knew that overthrowing the tyranny phone companies was too big of a project for his small company, but if he could empower people to do it themselves, to connect to one another, and to spread the word, he would be able to incite a movement.

Electric utilities have a long history of lobbying and protecting their monopolies, and a massive disruption will likely need a bottom-up approach from the masses.

On its own, the blockchain records energy transactions, doing little to help balance the utility grid or microgrid. It’s when business models start employing real-time price signals and locational martinal pricing (LMP) that the markets will start to take the planning role away from centralized utilities. But by introducing free, open-markets, a blockchain grid will be able to cut the electric utility out all together, encouraging an ecosystem of locally owned grid resources can adapt quickly to price signals such as energy storage.

One Vienna-based company, Grid Singularity is already working with blockchain to enable a market approach to rural electrification in developing countries. It will allow anyone in a village to install solar panels and sell excess energy to their neighbors. Though both Transactive Grid and Grid Singularity have extensive energy experience on staff, the true breakthroughs, like Blockchain are likely to come from outsiders, according to some utility executives themselves.

Alternatively, GE is well positioned to capitalize on P2P energy trading with their $1 Billion launch of Current, “a digital power service built to transform the way we use energy.” IBM has partnered with Samsung to deploy Blockchain-based power bartering between appliances. There are several innovative energy companies in Europe, but an ESMT report shows a wide open space for transformational leaders: 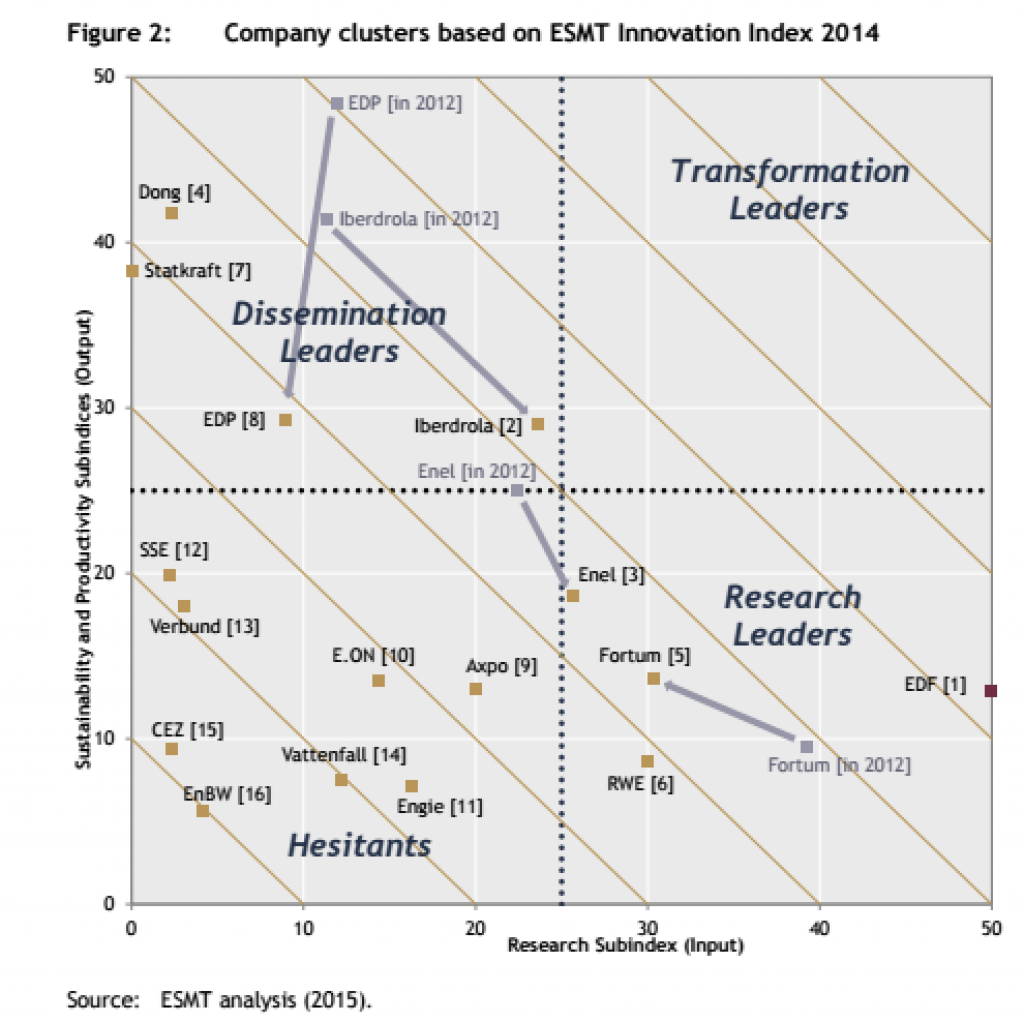 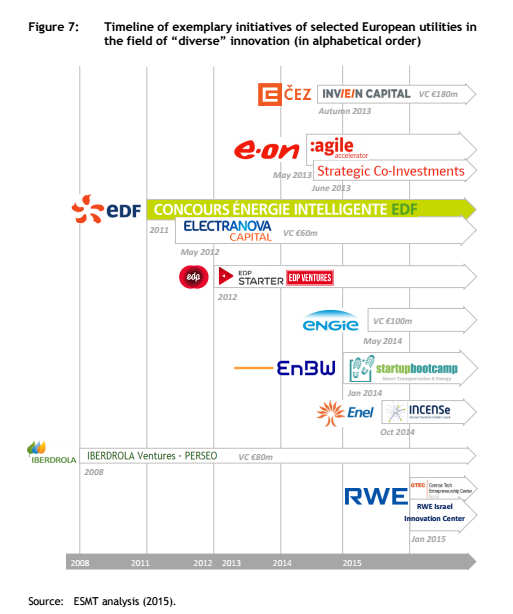 Community Solar Racking Gets More Affordable, Efficient, and Hands On